THE MOST BEAUTIFUL HOSPITAL IN AMERICA 2017 !

Orange Regional Medical Center has been named "The Most Beautiful Hospital in the U.S. 2017" and my mural played a major role in its selection.  As you can see from the  posts on this blog the curator and I,with the help of the support of the board, put a lot of work into the art and it has paid off by making visitors and patients feel at ease while in the ER space.  I'm so appreciative of the recognition. 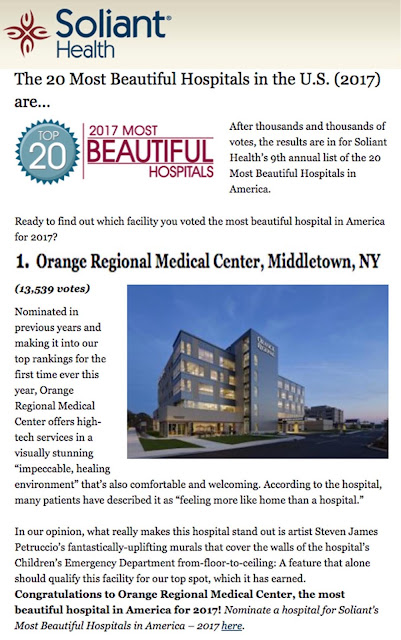 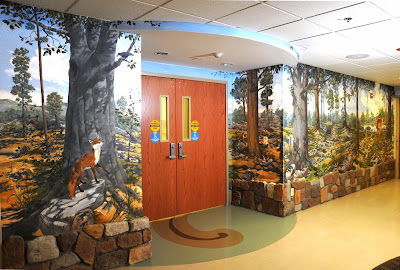 When I painted the mural in  my studio I had to paint it in sections on two walls so it has never been one continuous image...until now.  It's missing a few corners but this is s good idea of the whole picture.

I recently donated artwork  for a coloring book which will be used to help young patients feel better about being in a hospital.  I believe that art does help healing and the following article supports that! 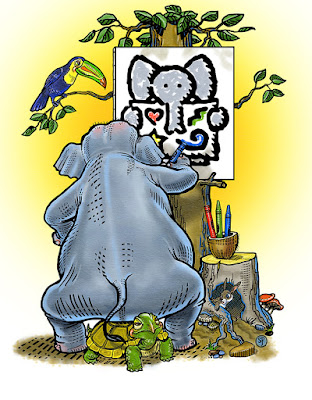 In two separate experiments on more than 200 young adults reported on a given day the extent to which they had experienced such positive emotions as amusement, awe, compassion, contentment, joy, love and pride.

Samples of gum and cheek tissue - known as oral mucosal transudate - taken that same day showed those who experienced more of these - in particular wonder and amazement - had the lowest levels of the cytokine Interleukin 6 which is a marker of inflammation.
Psychologist Dr Dacher Keltner, of California University in Berkeley, said: "That awe, wonder and beauty promote healthier levels of cytokines suggests the things we do to experience these emotions - a walk in nature, losing oneself in music, beholding art - has a direct influence upon health and life expectancy."
Cytokines are chemicals necessary for herding cells to the body's battlegrounds to fight infection, disease and trauma but too many are linked with disorders like type-2 diabetes, heart disease, arthritis and even Alzheimer's.
Dr Jennifer Stellar, of Toronto University who was at California University in Berkeley when she carried out the study, said: "Our findings demonstrate positive emotions are associated with the markers of good health."
It has long been established a healthy diet and lots of sleep and exercise bolster the body's defenses  against physical and mental illnesses.But the study published in Emotion is one of the first to look at the role of positive emotions in that arsenal.
In addition to autoimmune diseases elevated cytokines have been tied to depression.
One recent study found depressed patients had higher levels of the pro-inflammatory cytokine known as TNF-alpha than their non-depressed counterparts.
It is believed by signaling the brain to produce inflammatory molecules cytokines can block key hormones and neurotransmitters - such as serotonin and dopamine - that control moods, appetite, sleep and memory.
Dr Stellar said: "Awe is associated with curiosity and a desire to explore which could counter inflammation where individuals typically withdraw from others in their environment."
As for which came first - the low cytokines or the positive feelings - it's "possible having lower cytokines makes people feel more positive emotions or the relationship is bi-directional.”

Sarah Johnson has gone to great lengths to ensure that the art for ORMC creates a healing environment.  With the support of  President & CEO Scott Batulis, the resulting hospital is amazing. Read all about it here: 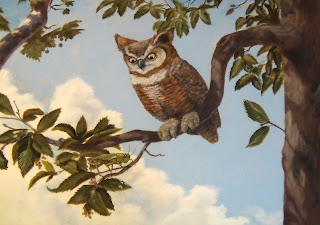 The dedication of the new Children's Emergency Department was great.  Here's a link, below,  to some photos on the ORMC website. 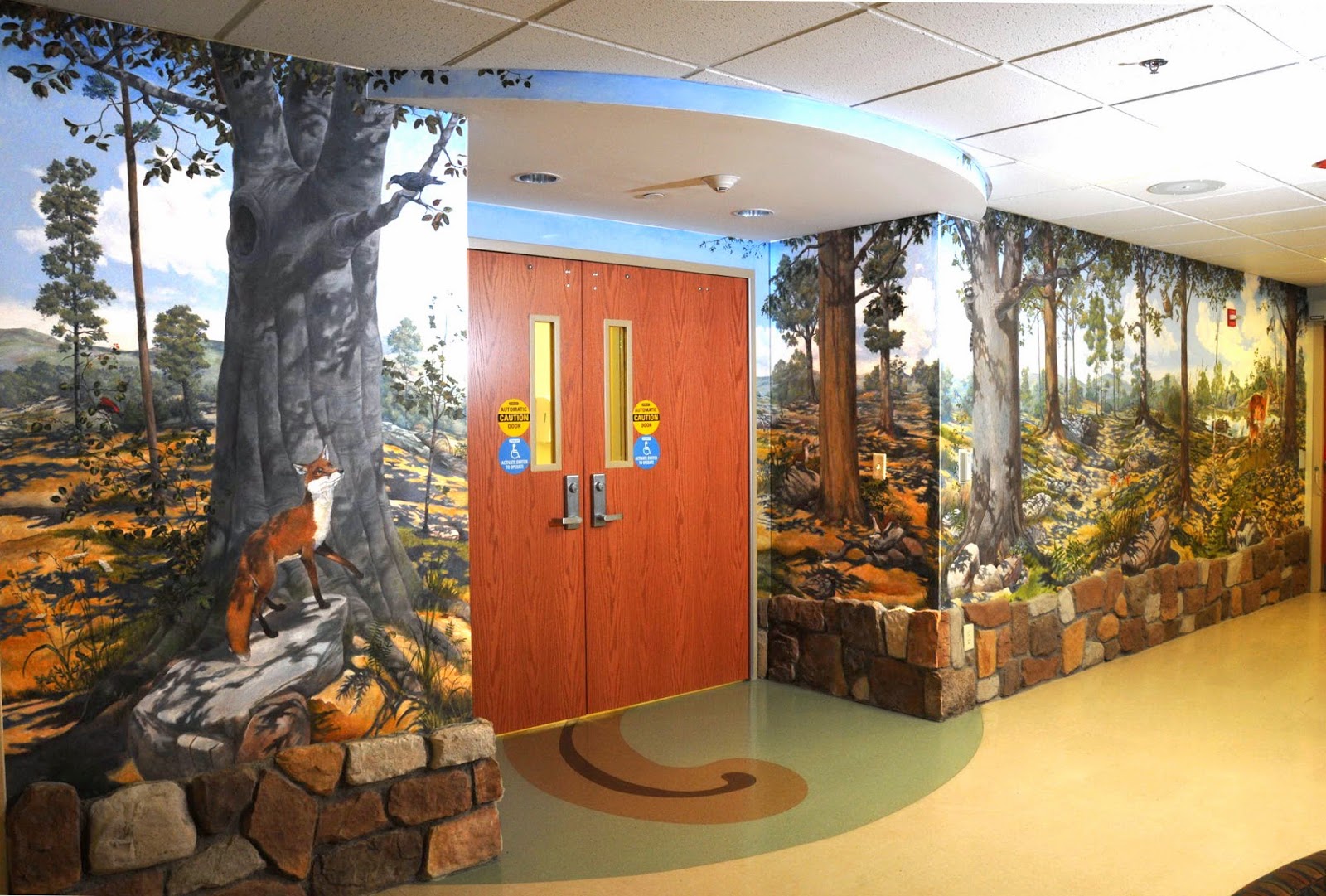 The new Pediatric Emergency Unit was dedicated today at ORMC.  The mural looks great in its permanent home.  Another artist, Ron Gee, told me that he saw a child looking at my mural and asked her mother if the animals were real!  Sarah Johnson, the art curator at ORMC did a great job bringing together artists working in a variety of media to create a visually appealing environment.  My mural at the entrance sets the tone for the unit and welcomes patients to the hospital.

I contacted  Barbara Gallo Farrell at the Poughkeepsie Journal  and told her about the mural.  She asked if I would write an article about my experience creating it so here's a link to that story...

Barbara is a great supporter of the arts in the Hudson Valley and I thank her for her interest in my work and the hospital. 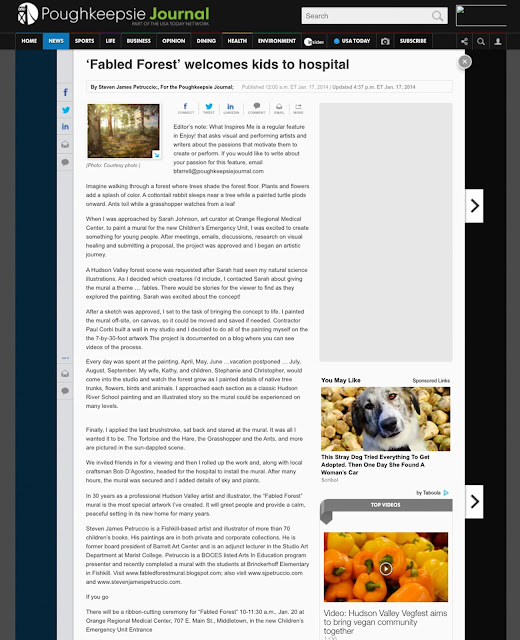 Steven James Petruccio
I was an artist as a child and am still creating art. As a boy I drew pictures while studying the works of comic book artists and Michelangelo. With no art classes in elementary thru high school, I was left on my own to discover the how and why of art. It was Burne Hogarth who wrote a letter of recommendation for me to get into the School Of Visual Arts in NYC. I learned how to say what I wanted to say in a painting and make it an illustration, a unique craft of thinking, drawing and communicating. I began getting freelance illustration work before I graduated. Work grew steadily and after a few years I began illustrating children's books. With more that seventy books to my credit, I was the recipient of the 2012 Rip Van Winkle Award for my contribution to children's literature. I developed my own vision in my fine art paintings. I painted the places and things I knew best. My work was soon accepted into juried exhibitions at the North East Watercolor Society and The American Artists Professional League. I was a board member for Barrett Art Center and am an adjunct lecturer in the Studio Art Department of Marist College.